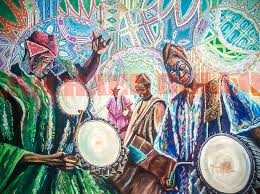 Saworoide is a Yoruba movie written by Akinwunmi Isola and produced by Tunde Kelani. It is available on Youtube in two parts on Tunde Kelani’s channel. It was released in 1999 but its message still rings true to date.

Saworoide, referring to the brass bell talking drum, is both the name of the movie and an important player in the tale. For the fictional Yoruba land of Jogbo, a ritual with the Saworoide  had been established for rulers about to ascend the throne. All the rulers must partake of this ritual, all but one. Lapite (Kola Oyewo) who becomes the King early on in the story and rejects the ritual as he intends to use his new position to enrich himself and escape accountability. His decision to avoid the ritual has repercussions; the first being that he risks sharing his crown, and the second being his death by a splitting headache if the Ayangalu beats the saworoide drum. This repercussion affects any ruler who doesn’t take part in the ritual. To see that this doesn’t happen, Lapite’s friend who is also the Balogun in his court arranges for the assassination of those who are key in initiating the repercussions, or those who are threats to Lapite. The task is not done satisfactorily, but Lapite carries on for 15 years with a new wife and corrupt policies thinking he is safe.

Things begin to unravel when the people stand up to the King, his chiefs and the workers who are all involved in the deforestation of the land; cutting down trees without planting new ones, extending the work into sacred forests and seeing that the proceeds remain with the upper class. Contenders to the throne are on the scene, as Aresejabata and the military serve in different capacities against the tyranny of Lapite.

There is some resolution as justice is served but the story is incomplete. A 2002 sequel ‘Agogo Eewo’, is said to tie up the loose ends. I look forward to watching it and giving a review. In addition, a prequel named Iyan Esuru may be in the works according to a tweet by Tunde Kelani in 2021.

There are many things I liked about the movie. Although fictional, the events in the land of Jogbo call for reflection and action on the part of leaders and citizens for positive change. I admire the use of the talking drum and interpretation given, as well as the presentation of Yoruba burials as a celebration of life as the pallbearers and citizens dance with the coffin after the death of the King before Lapite. In addition, the costume and wardrobe for traditional attires is really good, I unfortunately can’t say the same for non-traditional outfits. It was also wonderful  to see many well known actors. My favourite feature however, may be the names of the characters. There appears to be the belief that Yoruba names are only ‘Oluwa-so-and-so’, ‘Ade-so-and-so’, ’Ola-so-and-so’ etc. It is not wrong, as many Yoruba names do have Oluwa, Ade or Ola in them however, the scope of Yoruba names is much more broader than that. People have names based on the circumstance of their birth, their oriki, from prayers, from profound sayings and proverbs, even from the occupation their lineage practices as seen with Ayangalu. This film gives us beautiful names such as Araparegangan, Aresejabata, Kangidi, Asabi, Adebomi, Lagbayi, Awamowaro, Lagata etc. This opinion is not to ‘hate on’ names that have Oluwa, Ola and Ade, rather it is just an appreciation of names that seem to be underused and underappreciated.

I don’t have a lot of complaints about this 105 minute piece of entertainment. The only issues I would raise are with the special effects, the seemingly slow-paced nature of the movie at times, the already stated wardrobe choices for non-traditional attire and a pause between the fourty-first and fourty-third minute in part one where we miss some of what is going on.

With the exception of the above, I really enjoyed the movie and appreciate the work of Kola Oyewo, Bukky Wright, Lere Paimo, Peter Fatomilola, Adebayo Faleti, Ayantunji Amoo, Kunle Afolayan, Kabirat Kafidipe, Akinwunmi Isola, Larinde Akinyele, Kunle Bamtefa, Goroso and Tunde Oyeyemi amongst others. The thing that struck me the most was the scene where a journalist questioned Lapite about the measure of progress during his tenure, and the King’s response referenced the wealth of rich people increasing. It struck me that he thought it acceptable that the measure of progress during his time was that the rich got richer. Now, we don’t necessarily use his yardstick for progress, but I had to ask myself

‘What do we accept as the measure/yardstick of progress in our day?’

As I round up, I would like to point out that although the movie came out in 1999, I have reason to believe that its timeline is much earlier. When the characters of Kola Oyewo and Lere Paimo initially discuss the Saworoide and getting out of the ritual, there is a calendar on the wall. When you watch it, look out for the year and comment what you believe it is.

Conclusively, I enjoyed this movie and believe that its message is still very timely to the political climate of a lot of places. Give it a watch and let me know your thoughts.

I realise I owe you all a review on Magun Thunderbolt , I guess we’ll have to add Agogo Eewo to the list of movies I owe you a review on, as another movie currently has my attention. Till next time.