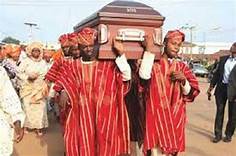 Burial and Funerals in the Yoruba Culture – ÌSÌNKÚ

Ìsìnkú refers to the burial rites which are the final steps carried out for or regarding a person or people who have passed on. For someone who has lived a good and long life, their passing is celebrated with dancing, merriness and joy. However, there are other types of death which are seen as very saddening such as the death of children. Where a sad death has occurred there is no fanfare or celebration, the deceased are buried quickly and people mourn.

Traditionally, causes of deaths are typically classified under one of these categories

Steps taken when someone dies

Before publicly breaking the news, the deceased is covered in white clothes and their surroundings redone and prepared for mourners and comforters so that the corpse is met in a decent state. Money for the announcement and money for the land where the deceased is to be buried is paid.

After the corpse has been given a bath and dressed up in white, perfumes are used on the deceased on a mat. The body openings such as the mouth, nose and ears are blocked with thread but in present day cotton wool. Their place is decorated and they are laid out in the open whilst women of the household praise, hail and say the oriki of the deceased. 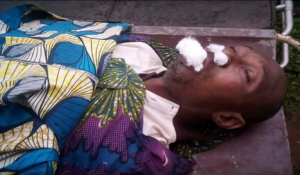 How is the burial conducted?

Back in the days, the oldest person in the house was buried in the room or in the room used to entertain guests. When it is time to bury the person, the corpse is put into the coffin with  ẹ̀ko tútù (cold pap),  wine kolanut and white kola nut , aṣọ (clothes), bàtà (shoes), ọ̀pá ìtìlẹ̀ (walking stick), ìlèkè (beads), ọkọ́ (hoe) ,  àdá (swords) and ọ̀bẹ (knives). Money as well is given to the corpse to be used on the way to heaven.

The first born of the deceased pours the first soil of the dug grave on the coffin in the grave before other family members.

With tears and more pouring of sand by other family members, they bid farewell to the deceased and ask they greet other late loved ones in heaven. This is followed by more greeting and hailing of the deceased……

What follows next is expenses for the burial related activities and hospitality towards guests. Drinks and food are provided if money is available but the festivities can be postponed if the family is strapped for cash. After seven days, there is a celebration for the coming out period after the burial.

When a woman becomes a widow, she mourns and stays indoors for anywhere between 40 days and three months. She also does not wear bright clothing or jewellery. However, widowers are not expected to sleep alone. Another woman sleeps with him so that the dead wife won’t come and be by his side.

In present day, burial related events are heavily influenced by Christianity and Islam and not every traditional element is retained. Praise singing, celebrating a good life, communal regard for the dead and assistance alongside hospitality towards guests are still very key till this day in Yoruba death and burial events.

What new things have you learned and what did you find most interesting about the things related to burial procedures in Yorubaland?

Let us know what other topics you’d like us to talk about.