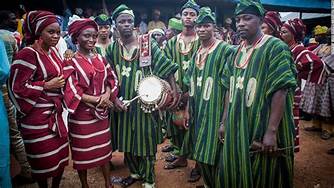 In African linguistics, Yoruba is categorized as a member of the Benue-Congo branch of the Niger-Congo language family related to Igala, Edo, Ishan, and Igbo etc. Yorùbá language spans across a spectrum of dialects ranging in pronunciations and understandability. Ethnologue lists 20 distinct varieties of Yoruba dialects which are assembled into five regional geographic groupings:

You can click the links below to hear these dialects spoken. The links will say ‘Here is an example of….’

Here’s an example of Egba a Northwest Yoruba Dialect

This is the Yoruba in the furthest parts of the region that border the Hausas in what is now Kogi State. They are grouped together as the Okun dialects but are not mutually comprehensible. Some Northeast Yoruba dialects include: Aworo/Oworo- mainly spoken in Lokoja (near Abuja), Yagba dialect, Ijumu dialect, Ibunu dialect (found in the town of Kabba) and Owe dialect.

Here’s an example of Ijumu a Northwest Yoruba Dialect

Central Yoruba
This is the Heartland of the Yoruba people and includes some of the more iconic and most ancient of the Yoruba dialects. People who speak this dialect easily stand out as they often change the “i” in a letter to “u.” For example, isu, meaning yam, would become usu. It is most similar to northwest Yoruba. Ife, Ijesha, Akure and Igbomina are some central Yoruba dialects.

Here’s an example of Ijesha a Central Yoruba Dialect

Southeast Yoruba
This is the Yoruba that is most similar to the languages of Igala and Itsekiri,. However, Igala and Itsekiri are not dialects, rather, they are distinct Yoruboid languages. This region was mainly dominated by the Benin Empire. This also includes the iconic Ijebu people, who have become popular in and out of Nigeria. Ondo, Owo, Ikale, Remo, Akoko and Idanre are among southeast Yoruba dialects.

Here is an example of Ijebu a Southeast Yoruba Dialect

Southwest Yoruba
These groups of dialects are found in the countries of Togo and Benin or the borders and were cut off from the rest of the Yoruba speaking people of Nigeria. It is believed that they often intermarry the Fon people. Some southwest Yoruba dialects are Ketu, Idashia, Ife and Awori, Ipokia/Anagbo

Here is an example of Ipokia/Anagbo a Southwest Yoruba Dialect

The documentation of Yoruba and its 20 plus dialects is pivotal to achieving a deeper understanding of the language, cultures and history. As such, if you speak a Yoruba dialect or know someone who does, we urge you to document the usage of this dialect. Yoruba is a commonly spoken language, however it is largely endangered and poses a threat of extinction as deemed by journals of African Studies and research covering African linguistics. Documenting and learning these dialects can help preserve them.