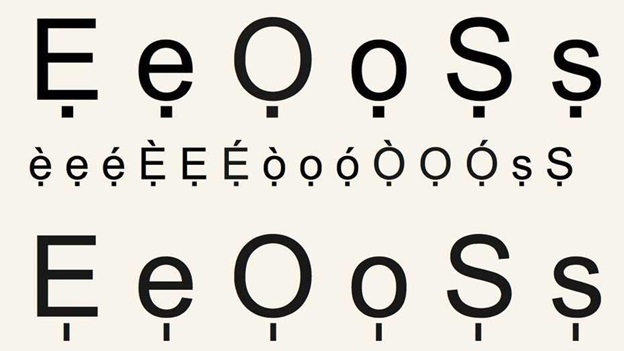 How to Use Accent Marks in Yoruba – A Melodious Language

Today, we’ll be looking at a really important part of the Yoruba language which is the accent marks on the words. As a Yoruba language learner, you may have noticed the various pronunciations and tonations within the language. Yoruba has eighteen consonants, seven oral vowels, and five nasal vowels, plus a syllabic nasal. Understanding the nuances of tone/accent marks in Yoruba, also known as Àmì Ohùn, are fundamental to enhancing your speaking, writing and reading skills. The best way to approach this intricate part of the language is to view Yoruba as a melodious language.

How many languages do you know that enable you to essentially sing as you speak? Yoruba executes that effectively with its usage of three key tone marks: do, re and mi.
Do= low-tone
Re= mid-tone/neutral
mi= high-tone

Yoruba tone marks not only convey melodious expressions of a given word, they also inform both the pronunciations and meanings in words and phrases. If not indicated correctly, a word spelled the same way can have multiple meanings.

For example, the word ‘owo’ can have multiple meanings ranging from money to hands. Tonal marks are what distinguishes these meanings. Classified by diacritics resembling an apostrophe mark, they are used to mark the tone of a vowel (a e ẹ i o ọ u) within a syllable. Likewise, dots below e, o & s (ẹ, ọ, ṣ) are also characterized as accent tones. The pronunciations of ‘pe’ and ‘gb’ are two sets in the Yoruba alphabet that tend to also challenge learners. Below is a list of various word examples along with their corresponding accent mark classification.

Tone marks are the pillars of Yoruba language. It can be difficult to read and comprehend the meaning of sentences if this is not done, hence why knowledge of the nuances of tone marks is key to holistically learning the language.

That’s not all with Yoruba tone marks. Pronunciations in the language get slightly more complex and tricky with the addition of its five other dialects coming from the Northwest, Northeast, Central, Southwest and Southeast regions. We also see practical influences of tonal marks within Yoruba musical instruments like the bata and gangan. However, those are stories for another day. Stay tuned for future blog posts on those topics.

So, which Yoruba word(s) do you struggle to pronounce? Let’s help you!