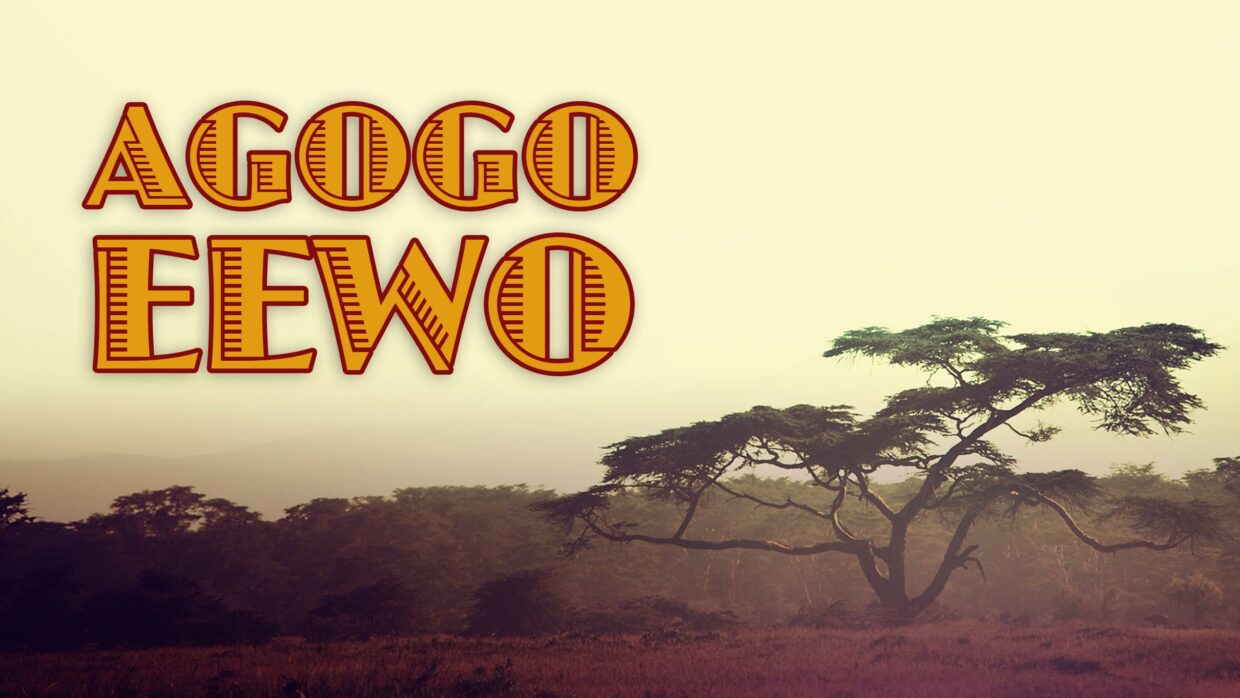 Agogo Eewo is the sequel to Saworoide, which we have already reviewed here. If you’ve given that a watch, you will find characters and locations in this movie familiar. To watch it all at once, I would recommend you do so on Olayemi Olatunji’s youtube channel. There it is titled ‘AGOGO EEWO – Saworoide Part II’, it runs for the entire 1 hour 49 minutes uninterrupted. If you prefer watching in small parts, then head over to Tunde Kelani’s youtube channel where the movie is available in numbered clips mostly between ten and fifteen minutes.

Agogo Eewo continues in the land of Jogbo where a new King is needed as Lagata is dead due to the Saworoide and Arese is deemed by some too young to be King. The corrupt chiefs from the previous government want Bosipo, a police officer, to be the new King. They think he will be malleable for their devious plans but Bosipo wants no part of it. He eventually becomes King, and the movie primarily follows the back and forth between the corrupt Chiefs and Bosipo, who attempts to quell their moves whilst helping Jogbo become better.

Like many movies, the theme of ‘good eventually defeats evil’ is present, and this is achieved through the Agogo Eewo. Agogo Eewo, meaning taboo gong, is a check for the chiefs just as the Saworoide is a check for the ruling King. It was gradually weaned out as Chiefs overtime attempted to escape accountability. Bosipo finds out and revives the tradition as a means of dealing with the problematic Chiefs. Similar to Saworoide, the chiefs partake in a ritual and if the Agogo Eewo is struck seven times they will die of a terrible stomach ache, if they fail to confess. This only happens if they use their position for bad activities like stealing. If they confess however, they will be given the antidote and severely punished for their crimes.

Without giving away too much, that’s a summary of Agogo Eewo. We see some characters from Saworoide return such as Balogun, Seriki, Bada and Iyalaje (the corrupt chiefs), Arapa’s mum, Awamowaro, Arese and Arapa, the inquisitive journalist who questioned the chiefs etc. Although the corrupt chiefs and Awamowaro have more significant roles, I do wish we got to see a little more of Aresejabata and Araparegangan.

I would like to highlight some things I loved about the movie. As always, the cultural depiction and representation was admirable. From the drums at the beginning that had me moving my shoulders continuously to the mother daughter convo about traditional Yoruba headgear and the tongue twisters, I was a fan! The sprinkling of Yoruba history into the dialogue and Areku giving us traditional dance moves also grabbed my attention. I say grabbed my attention because the pace felt slow sometimes but that is not necessarily a bad thing, because not everyone likes fast paced movies.

The storyline itself was enjoyable. Bosipo did try to correct the errors of his predecessors and move Jogbo forward. His focus being the ‘eradication of poverty from the masses’ stood out compared to the former King, Lapite’s declaration of ‘the number of rich people increasing during his tenure’ as a measure of progress. His appointment of some new Chiefs applauded by the people did not go unnoticed, as I observed also that there were more female chiefs in comparison to previous governments. Bosipo’s integrity stood even in the face of his wife who wasn’t quite a Lady Macbeth, but might have gone on to become one, where instead of fuelling her husband’s ambitions to kill and rule she appeared to try and make him comfortable with corruption.

The movie left me with many thoughts, but one I would like to share with you all is on the actions of Chief Oloto and Chief Otun who decided to quit after they believed that the chiefs and King were becoming either complacent or complicit in the corruption that was going on. Some believe that to tackle bad governance, you must turn it good from the inside out as that is where power lies and real transformation can occur. Meanwhile, some would opine that getting out and opposing even if weak and politically unstrategic is the best course of action. What do you think? I realise that there would be nuances in each scenario but do you wholly support the chiefs who left. If yes, why? If not, why as well?

The movie was sweetly dedicated to Bola Ige SAN (a Yoruba lawyer and politician prominent during Nigeria’s second republic who was assassinated. He was also the former governor of Oyo state in South Western Nigeria), Wale Ogunyemi OFR (He was a veteran dramatist, film actor, playwright and Yoruba language scholar. His many contributions earned him the Nigerian decoration of the Order of the Federal Republic ), Professor Bassey Wai Andah (an intelligent and well published Nigerian archaeologist, scholar and teacher) and Sade Ladipo-Ajayi

After watching, I have gone back and forth a few times on which one I prefer between Saworoide and Agogo Eewo, but how about you? Which do you prefer? Plus, what movie should I do next?